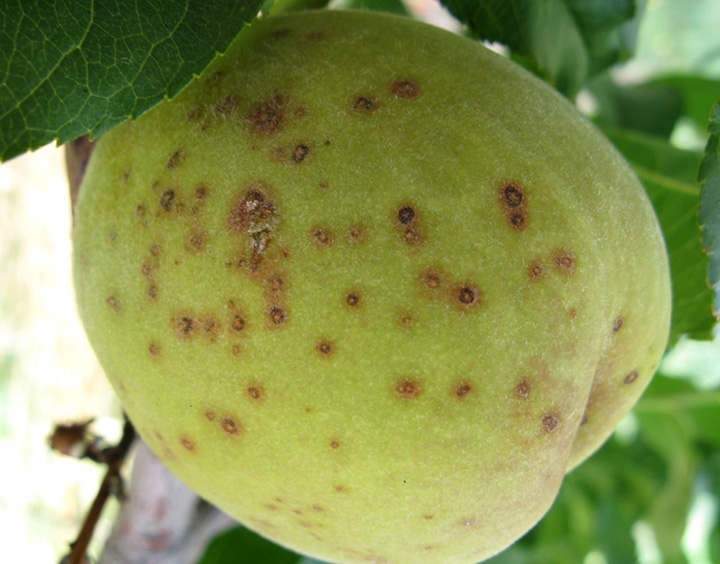 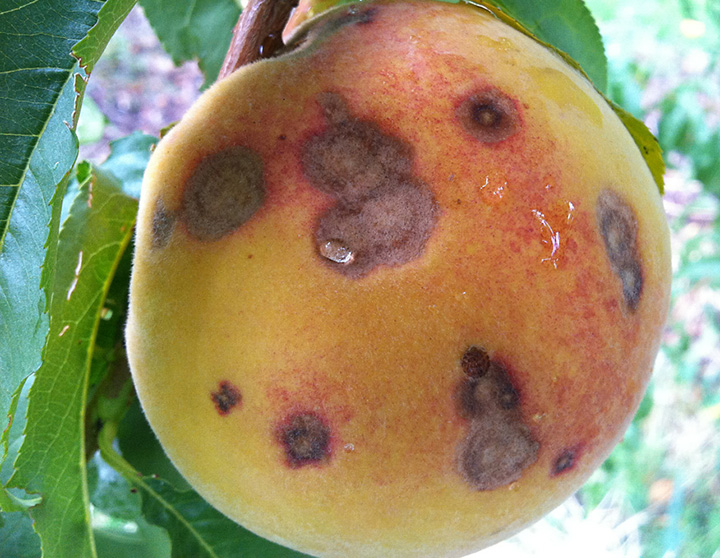 Coryneum blight is caused by the fungus Wilsonomyces carpophilus.  It is most common on apricot, peach, and nectarine.  The fungus overwinters in infected buds and in small twig cankers.  Infections can occur (via fungal spores) from spring to fall.  Rainy weather spreads spores from infected tissue to leaves and fruit by splashed and wind-blown rain.  Spores require 4 hours of moisture to germinate, sometimes leading to rapid spread of the disease within a tree.  (Movement from tree to tree usually slower.)  Lesions develop very slowly at 45°F; their development is much faster at optimal temperatures of 70-80°F.  In the fall, infections occur on leaf scars and spread to buds.

Leaf infections first appear as small red spots which enlarge and become purple with a tan-white center.  The spots then drop out of the leaf to leave a “shothole.”  Severe infections produce numerous holes and give the affected leaves a very tattered appearance.  Shoot infections also appear as reddened spots.

Fruit infections begin as purple-red spots on the f skin as early as shuck-split and may occur as late as at harvest.  Infections that occur on young fruit produce the largest and roughest, scab-like spots on the fruit skin.  The spots coalesce and cause the skin to crack and ooze.  Mid-season infections produce smaller red spots.  Infections on fruit nearing harvest produce sunken, greyish lesions.

During spring pruning, remove twigs that have dead buds with a sunken, darkened area encircling them.  During the growing season, check twigs and young leaves for small red spots.  Check fruit for small purple-red spots.

Fall applications of copper sprays or Bordeaux mixture at 50% leaf drop are effective in controlling this disease.  Chlorothalonil sprays in fall and/or spring before shuck fall also work well.