Managing fire blight is a year-round task. It is best to invest the energy in prevention and managing light infections than doing nothing and reacting to severe infections that may result in tree or orchard removal. 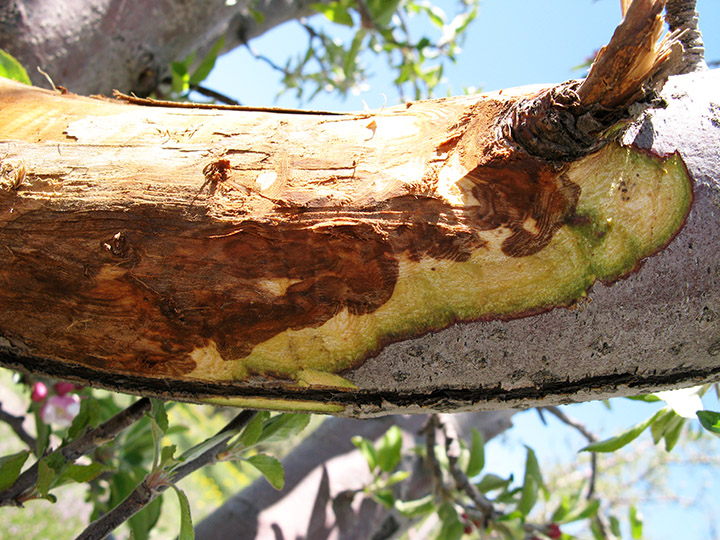 Fire blight is easy to spot in winter because the leaves remain attached. When pruning, it is important to find the edge of the fire blight canker and prune up to 12 inches below that into healthy wood.

The fire blight bacteria overwinter in cankers, and pruning out infested plant tissue will reduce the amount of inoculum in the orchard, thereby reducing future infections.  Pruning should be done in winter and early spring when the weather is dry.  Infected twigs are easy to identify because the leaves will remain attached well into winter.

Limbs with bark that appears wet, off-color, or sunken indicate a canker. Cut the twig or branch at least 8 inches below the visible margin of the infection.  Also remove all root suckers and rootstock sprouts because if they become infected, the entire tree is at risk (Common dwarfing rootstocks such as M9 and M26 are highly susceptible to blight). Tools do not need to be sterilized between cuts because the bacteria are not active at this time.  Debris does not need to be burned or chipped.

A copper spray works by providing a surface barrier that prevents bacteria from colonizing.  It can be applied from dormant to delayed dormant timing (between tight bud to green tip stages).  It must be applied as a high-volume spray so that all exposed surfaces in the orchard are thoroughly wetted, including orchard support structures.  Its effect is dependent on how and when it is applied, and the weather after application.  Whether a grower uses copper or not will depend on weather, cost, amount of infection in the orchard, and personal experience.

Antibiotics are applied in spring during bloom, only when the predictive model, Cougarblight, recommends. Cougarblight uses daily temperatures to provide a risk rating for potential infections. Utah orchards can access the fire blight model on the USU Climate Center TRAPs website. The model is based on several factors:

Daily maximum temperature:  Although bacteria can start multiplying at 50° F, the most accelerated bacterial division occurs between 78 and 90° F. The model uses a 4-day accumulation of risk values related to each day’s maximum temperature to determine risk potential. The 4-day tally may equate to low, caution, high, or extreme risk.

Moisture:  Even if flower stigmas are colonized with bacteria, infection will not occur without sufficient moisture to wash the bacteria into the floral cup.  The Cougarblight model provides a risk of infection and it is up to the grower to decide on the presence of moisture.  Wetting that triggers flower infection may come from 2 hours of rain, dew, or misting or light wetting from irrigation.  Heavy rain or irrigation water that directly strikes the blossom does not seem to trigger infection, perhaps because the blossoms are actually washed free of bacterial colonies.

Antibiotics should only be used on open blossoms.  They are not effective at any other time (for example on shoot blight or existing cankers).  Streptomycin (Agri-Mycin) is the most effective fire blight antibiotic available, but in Utah County, Utah, fire blight bacteria have developed resistance, limiting its use.

Streptomycin is effective because it has slight systemic activity, lasts 3 to 4 days, and kills the fire blight bacteria.  It can be applied up to 24 hours before or after a wetting event.  Adding the nonionic spreader-activator Regulaid will improve coverage and uptake of streptomycin.  In areas of documented resistance, streptomycin can be used once per season, and it must be mixed with another antibiotic on that one use.  So it should be saved for the “most important” spray where it will be the most effective.  In areas where there is no resistance, it is recommended to use streptomycin only when necessary, and mix it with another antibiotic to avoid resistance.

Oxytetracycline is not as effective as strep because it works by slowing down the division of bacteria rather than killing it.  As such, it works best if applied 12 to 24 hours before a wetting event to target the bacteria before it is washed into the floral cup.  Oxytet lasts about 3 days.

Kasumin (kasugamycin) is another antibiotic, registered in September 2014.  It has been extensively tested in Utah, the Pacific Northwest, and in Michigan, and found to be highly effective.  It should not be used more than twice in a row.

It is important to realize that all trees can have late blooms during periods when temperatures are warmer, resulting in a great risk for infection.  As long as forecasts predict a high risk and blooms are open, antibiotics may need to be reapplied for protection if there is 2+ hours of moisture.

Some organic growers are experimenting with the use of biologicals with their antibiotic spray program.  Biologicals alone have not shown to be very effective in managing fire blight, but in areas of streptomycin resistance, biologicals can help oxytetracycline be more effective.  For best effect, follow these guidelines when using biologicals:

The growth regulator Apogee (prohexadione calcium) can be used to manage shoot blight (but not blossom blight). Apogee does not affect the pathogen directly, and is not a substitute for streptomycin during bloom for blossom blight control. Apogee-treated shoots have hard cell walls, physically barring the spread and growth of fire blight, reducing build up during the summer.

Information on Apogee for fire blight

The decision to use Apogee is based on past blight history. Where infections are high and antibiotics and pruning are not proving effective, Apogee can help to lessen the spread within trees. The drawback is that the rate of Apogee that is required stops new growth and applications may slow development and result in reduced fruit size and return bloom.

Pruning new infections in summer is just as important as pruning old infections in winter. Early detection and removal slows the spread of fire blight in the tree. Young orchards are most sensitive and should be given high priority. If crews can catch blossom strikes just as they begin (i.e., the leaves/ flowers are just starting to turn color and wilt), the amount to remove should be double the length of the visibly damaged shoot tissue. If the infection is older, find the edge of the canker and then prune 12” beyond that. Prune only in dry weather. It is not necessary to disinfect pruning tools between cuts so long as proper cuts are made (below, and not through, cankers). Pruning debris can be left on the orchard floor to be mowed, so long as the weather is hot and dry.

Where infections are more severe and older wood is affected, it is often best to wait until winter to do a thorough pruning. Research has shown that heavy pruning of fire blight during the growing season can actually increase the spread within the tree.