Freeze/frost events can damage fruit buds and young fruit.  The level of damage is directly related to cold intensity and duration as well as bud developmental stage.  Data obtained from research done in Washington has been used to develop critical temperature charts that relate bud developmental stage with cold injury (see the end of this chapter).  Evaluating injury can help determine subsequent management practices.  A hand lens or dissecting microscope is required for good evaluation.

Fruit crops differ in bud structure and arrangement on the shoots.  Apricots, peaches, and nectarines have simple flower buds with a single flower within each flower bud.  In peaches and nectarines, buds are arranged in pairs (rarely in three’s) on last season’s shoots with a single vegetative bud between the flower buds.  Apricots, like cherries and plums, may have single to multiple flower buds on the last season’s shoots or clusters of simple buds on short branches, called spurs.  Apple, pear, cherry, and plum have flower buds with multiple flowers within a single bud.  Apple and pear buds are positioned as single buds on spurs or along last year’s shoots; cherry and plum buds have single to multiple flowers buds in clusters on the shoots or on short spurs.

Collecting and Cutting Buds and Fruit for Evaluation

Evaluation of bud and fruit damage begins with collection of shoots with flower buds.  The target is around 100 buds for evaluation, collected on shoots from differing heights within the tree and locations within an orchard block.  Varieties should be kept separated and bundled with flagging tape and a label.  These are then brought back from the orchard, the base of the shoots placed into a bucket (or a can) with water, and allowed to warm up at 70°F for a minimum of 2 hours to allow the damaged tissue to darken due to oxidation of phenolic compounds released by the injury.  Discoloration intensifies within injured tissues with time, so four hours is better than 2 hours for detection purposes.

Buds are then cut and examined for brown to black discoloration of the fruit pistil (young fruit within the flower).   A general rule of thumb is that sweet cherries need about 50% of the buds produced the previous summer in order to have a full crop; all the other tree fruits (apple, pear, apricot, peach, nectarine, and plum) need only about 10% for a full crop.

The cutting process requires a very sharp razor blade; single edge blades work well because they are stiffer and easier to control for cutting.  They are quite inexpensive and can be discarded when the cutting edge becomes dull or damaged. 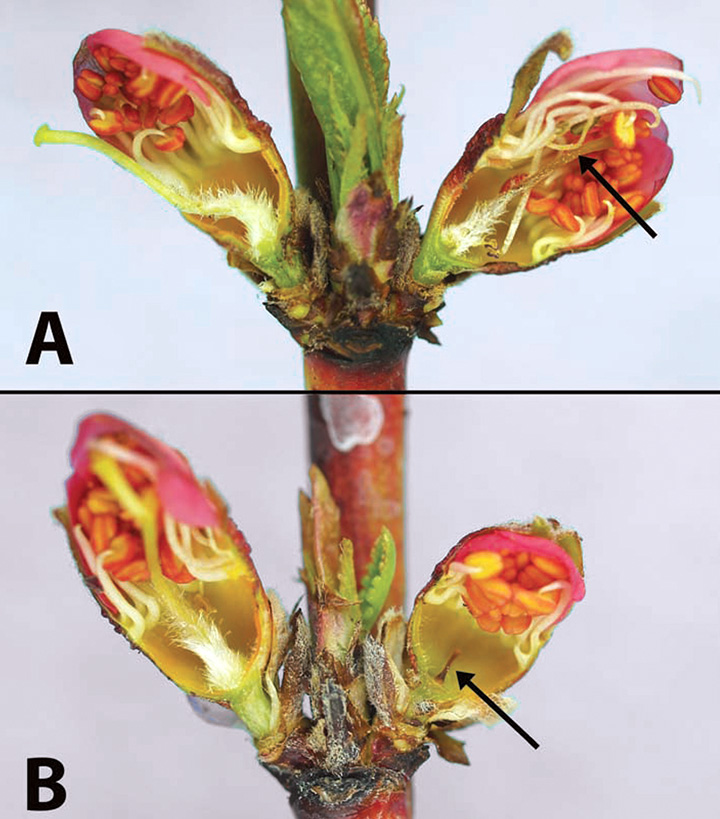 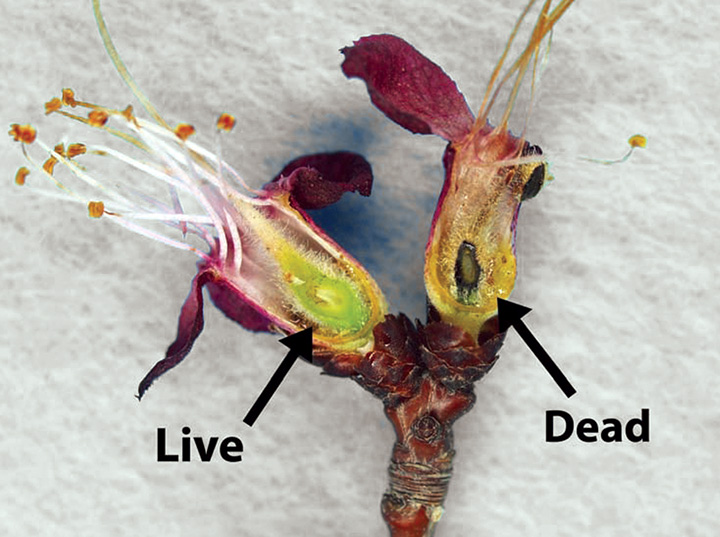 Apricot buds (full bloom stage).  Note the blackened pistil on the right, killed by the prior night freeze (photo by HJ Larsen) 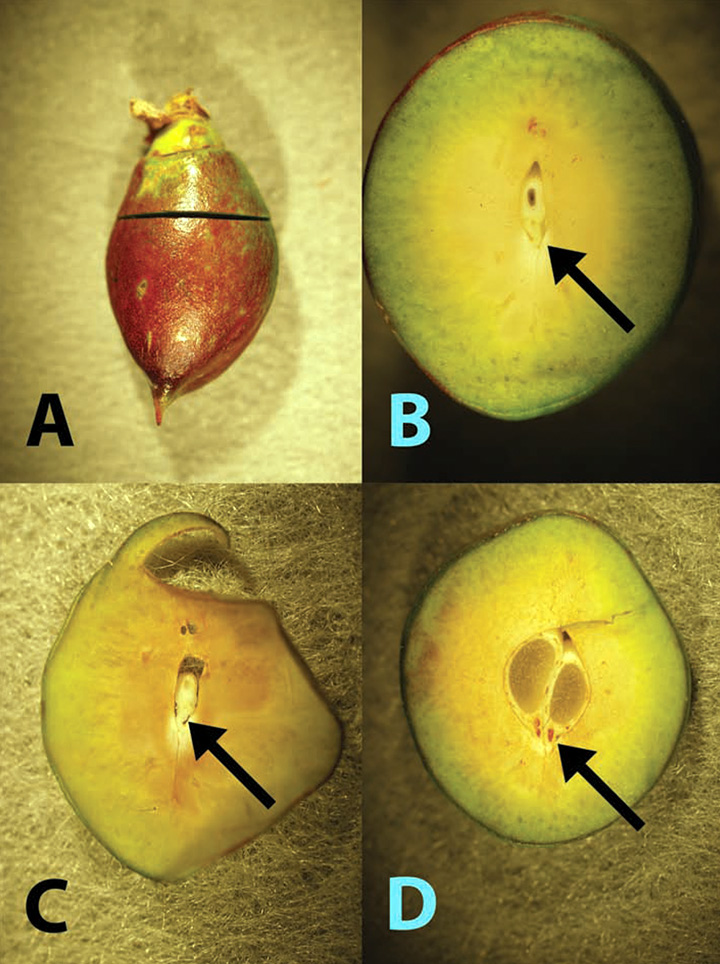 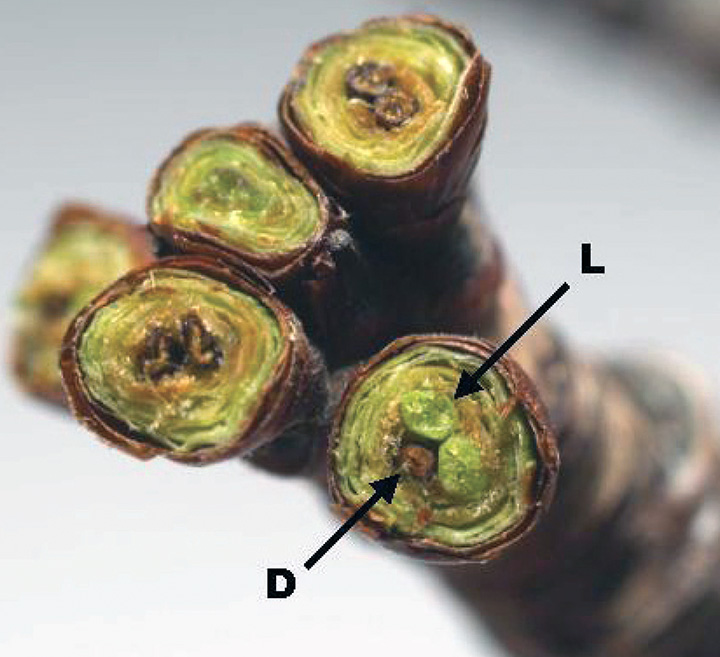 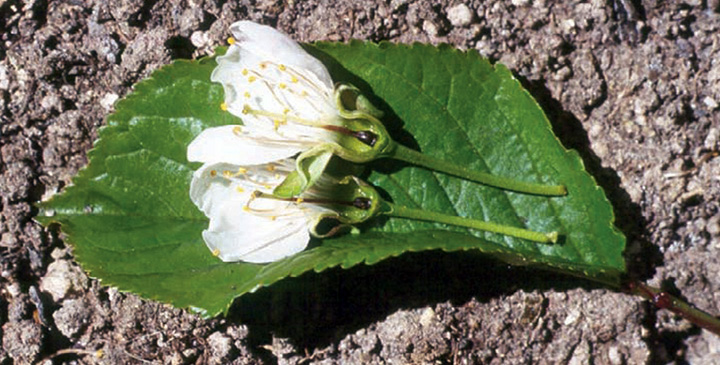 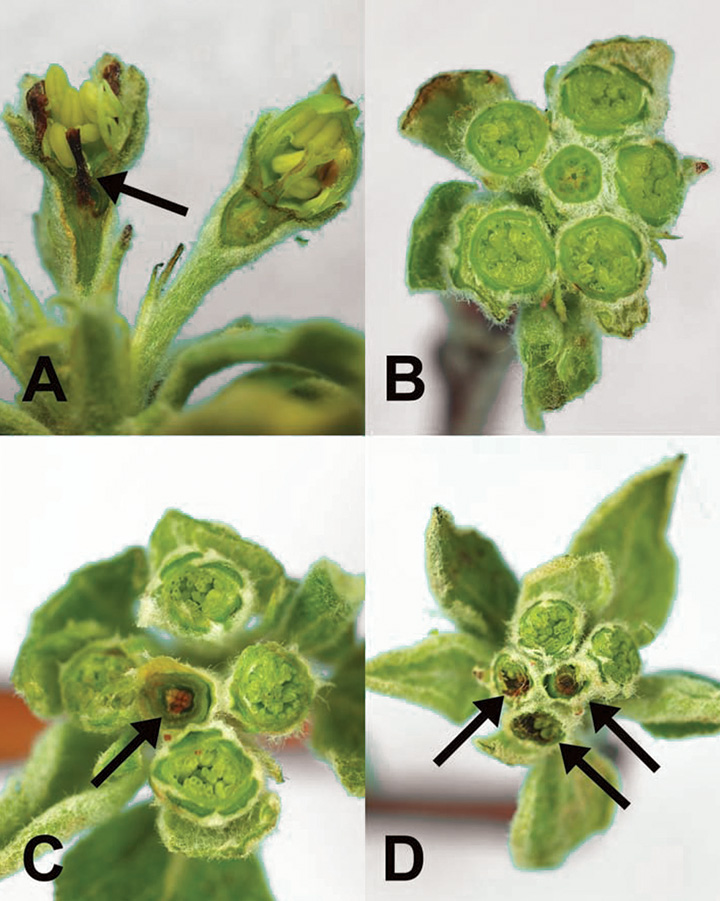 Sweet cherry, plum, apple, and pear buds are multiple-flower buds (more than one flower inside each bud). Plums typically have two flowers per bud, cherries usually have two to five, and apples and pears typically have six or more.  But both plums and cherries can have only a single flower within a bud if some flower initials are killed by winter injury.

A horizontal cut through these multiple-flower buds will cut through several of the flowers they contain. However, because the flowers within these buds often have differing timing for bloom, it is difficult to see all the flowers at one time.  Often the most advanced flower will be the highest (furthest from the base of the bud) and the least advanced flower be the lowest (closest to the base of the bud).  The earlier in bud development that the evaluation is done, the greater the possibility of seeing all the flowers within the bud.  At or near bloom, one needs to use more angled vertical cuts to reveal the pistils.

Apple and pear buds, like plum, tend to have differing timing for opening of the flowers within the fruit bud.  In apples, the “king bloom” is the first to open and typically has five “side bloom” flowers forming a ring around it.  Because it is earliest, it typically will be positioned toward the top of the bud when one makes a horizontal cut through the flower bud.

When flower structures are damaged by frost or freezing temperatures, injured tissues of the style and ovary will darken through formation of phenolic compounds in response to injury.  Cross-sectional cuts through the flower will reveal these darkened flower structures for by making sequential cuts beginning at the upper top of the bud and proceeding toward the base of the bud.  Because the style (the central portion of the pistil) is so much longer than the stigma (top portion of the pistil), it is typically the structure seen in the cross-sectional cuts through the upper portion of the flower where the petals are found.  Browning of this structure after a frost event is a good indication that the flower has been killed and will not become a successful fruit.

In pears, the spread in flower stage of development is even greater as they approach bloom.  However, the flowers tend to develop from the base of the shoot toward the top. This makes cold injury damage evaluation even more dependent of multiple cuts through the developing buds.  As with apple, damage to and discoloration of the stylar tissue within the blossom following exposure to freezing temperatures often is associated with death of the flower.  Pear has a tendency to develop late flowers at the tips of shoots (these are commonly termed “rat-tail bloom”).  These late flowers can escape earlier frost damage and set fruit, but the fruit usually is substantially smaller and lower in quality. 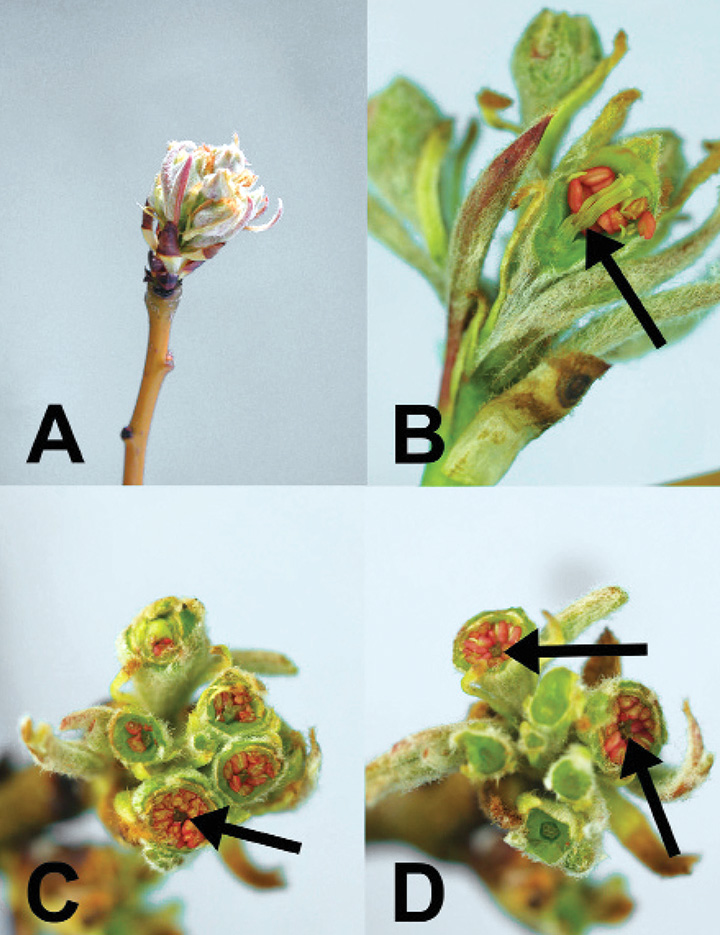 Finally, bud viability can also be assessed by forcing buds to bloom indoors.  Cut some shoots with flower buds on them, place them promptly into water and keep them at room temperature for several weeks. Re-cut the shoot ends every 5 days, so that the vascular tissue will continue absorbing water.

Most tree fruits accumulate around 400 Growing Degree Hours (GDH) per day when held at 70°F, and need between 4,000 and 7,000 GDH to reach bloom.  Thus, viable buds should bloom within 10 to 16 days when incubated in water at 70°F.  Apricots, peaches, and plums often complete chill requirements between late December and mid-January in the Intermountain West.  Cherries, apples, and pears often complete their chill requirements between late January and late February. 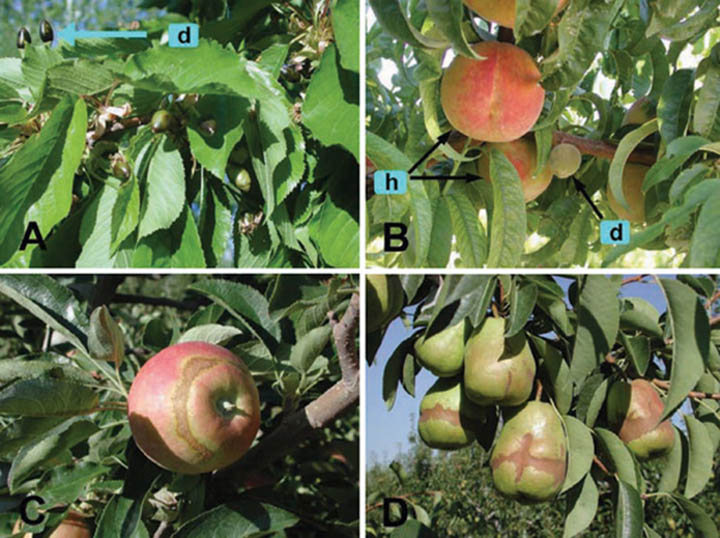 Very late frost events after petal-fall can cause injury to young fruit tissues and impact fruit quality and appearance.  Sweet cherry fruit exposed to cold can be killed outright.  Injury to young peach fruit can result in fruit that never sizes beyond the size of a walnut.  This can readily be seen as non-damaged fruit approaches ripeness.  Frost injury to apple and pear fruit kills the surface cells and tissues, causing a pronounced scabby pattern on the fruit surface that is termed “frost ring”.  Such affected fruit, although edible, are not salable and often are removed by hand thinning if possible.

Researchers working on cryopreservation of fruit buds have noted that buds that are frozen before they have cold acclimated (i.e., Sept., Oct., or early Nov.), often had oxidative browning of the vascular tissues lead- my-2ing to the buds.  Buds with such damage could not be successfully grafted for subsequent germplasm recovery.  This type of injury can occur from a late fall or early winter freeze, especially where mild temperatures precede a freeze event, but not after mid-winter when these tissues are very cold hardy.  Buds damaged in this manner may open, but subsequently fall off in late spring/early summer as water stress becomes an issue.  Consequently, fruit bud protection efforts against cold injury may need to include late fall/early winter, especially if a rapid drop to potentially damaging temperatures is forecasted to follow prolonged warm weather that slows cold acclimation by the buds.