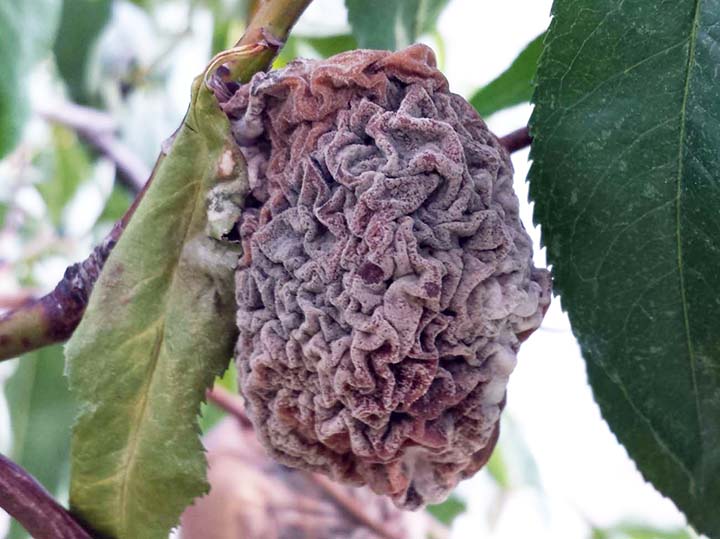 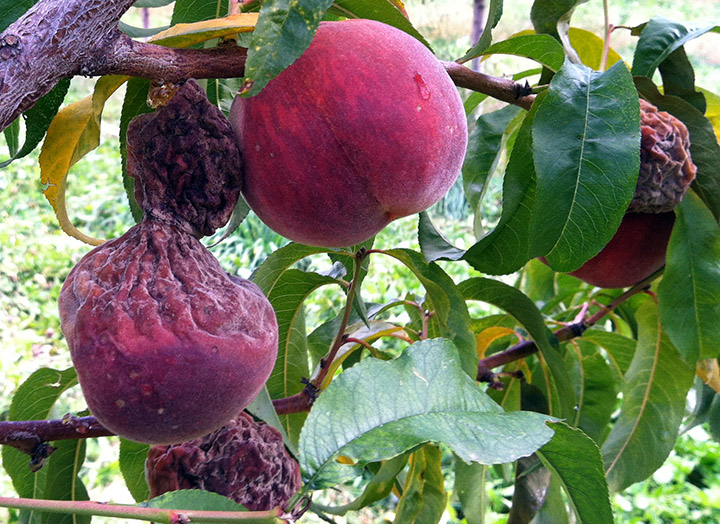 The brown rot fungus (Monilinia fructicola and related species) causes blossom blight, shoot dieback, twig cankers, and fruit rot. The most common symptom in the Intermountain West is fruit rot. The fungus overwinters in mummified (infected) fruit hanging in the tree or on the ground.  In spring and summer, spores form on the fruit and may infect flowers (not often seen) or ripening fruit. Ripening fruit must have a tiny lesion or opening from insect feeding, hail, wind damage, etc., for the spores to cause an infection. During seasons of late summer monsoonal rains, brown rot becomes more common on late-season peaches.

If blossoms are affected, they will wilt, shrivel, and die. As they turn brown, they remain attached to the twig in a gummy mass. The first evidence of fruit rot will occur in mid to late summer after the fruit ripens. Small brown lesions increase rapidly in size and within a week, the entire fruit can be infected. The infection produces a soft rot, though the skin occasionally remains firm, and the fruit shrivels. During moist conditions, the surface of the fruit may become covered with grayish-tan powdery spore masses. The infected fruit may hang in the tree through winter, or drop to the ground.

Sanitation is essential to prevent an epidemic during years that are favorable for disease development. Where brown rot has occurred in the past, fungicide sprays may be needed in successive years, applied when fruit has ripened and rain is forecasted.