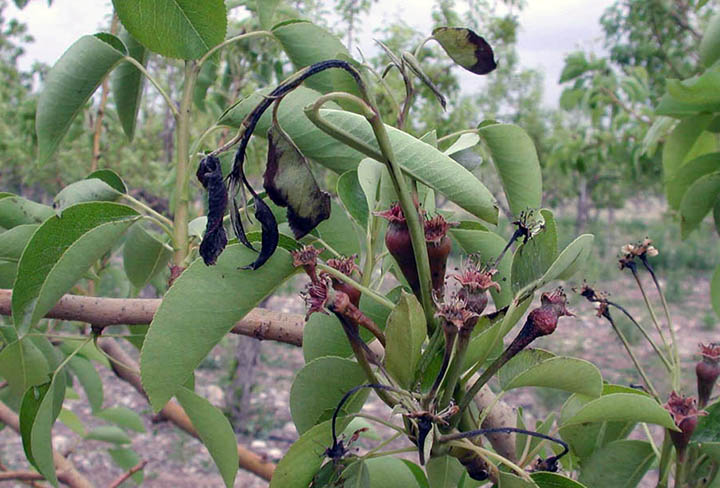 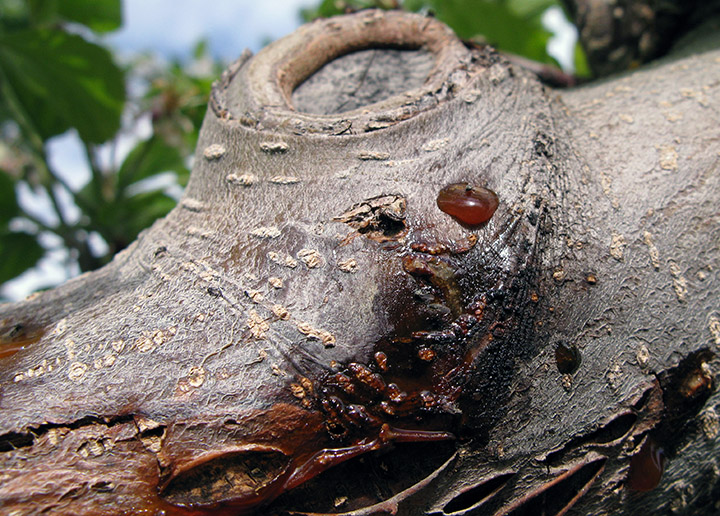 Apple and pear (plus some ornamentals in the Rose family, including quince, crabapple, hawthorn, ornamental pear)

Fire blight is a bacterial disease caused by Erwinia amylovora.  Susceptibility to infection varies.  For example, Bartlett and Bosc pears and Jonathan, Honeycrisp, Lodi, Rome Beauty, and Transparent apples are all highly susceptible to fire blight.

The causal bacterium can develop resistance to agricultural antibiotics and complicate control programs; this has happened in Utah County, UT.

The bacteria overwinter within infected twigs and branches in the orchard.  In spring, the bacteria multiply and ooze out of the bark.  They are then spread to open flowers by insects and rain-splash.

The bacteria colonize the flower stigma and infection only occurs when at least 2 hours of moisture (light rain or dew) to wash the bacteria down into the floral cup.  Infected tissue will be apparent from a few days to a week, depending on temperatures.

New infections can sometimes occur in summer when bacteria is able to enter leaves or fruit through tiny wounds (caused by hail or insects).

Whether infections are through blossoms or leaves, the bacteria will continue to spread inside the plant tissue, killing flower shoots, twigs, and limbs (depending on tree variety).  Spread slows in hot weather as well as at the end of the season.

Optimum temperatures for disease development are 70-81°F, with little growth below 50°F or above 95°F.

Infected blossoms on apple turn brown, and on pears, turn black.  There is often bacterial ooze visible from the pedicel.  Infected terminals (shoot ends) often develop a curled, drooping end, called a “shepherd’s crook”.   The leaves will eventually dry up and hang on to the tree through most of the dormant season.

Fruit infections on both apple and pear begin with a firm brown rot that quickly includes the whole fruit.  Droplets of ooze may be present on the fruit surface.  Infected fruit gradually shrivel and can remain attached through the winter.

Cankers (slightly sunken areas of dead bark tissue)  develop when the infection progress into woody tissue.  The canker margins may crack as the bark dries out in late summer or fall.  Small droplets of amber ooze are especially evident in spring.  The infected tissue just under the bark will show streaks of reddish brown.

Be vigilant when weather conditions favor blight development during bloom.  When temperatures rise above 65°F for several days, there is a greater chance of infection when moisture arrives.  The Cougarblight model can predict infections.

In late spring, scout orchards for infected/wilted blossoms.  Continue scouting for infections once per week until the weather turns hot.

During pruning in winter, look for dead twigs that still have leaves attached.  These are old shoot infections.

An effective management and control program for fire blight should include both cultural and chemical aspects.