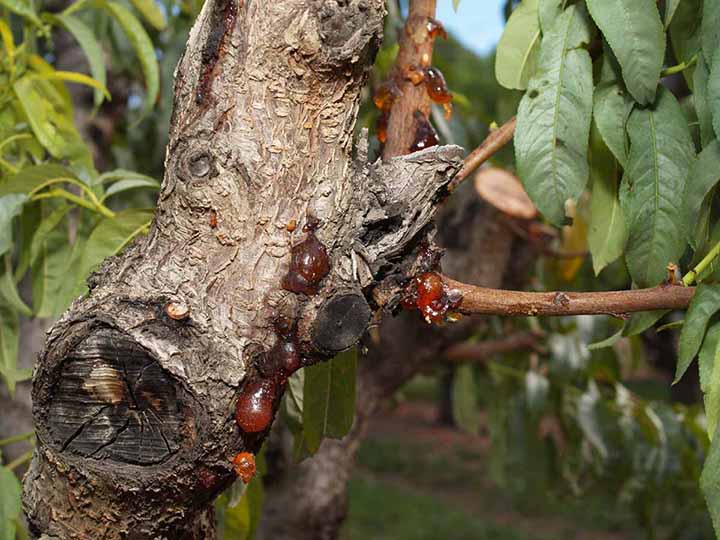 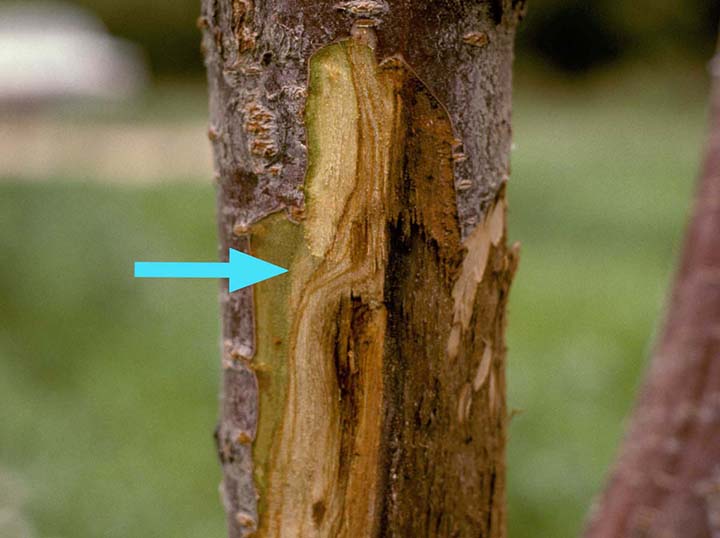 Leucostoma is a wound parasite – it needs an injury to the bark to enter the tree, such as frost injury, pruning wounds, borer damage, spray injury, or other wounding.  About 30 days after initial infection, pimple-like fruiting bodies (pycnidia) form beneath the infected bark surface, creating a new crop of spores for release.  The spores are spread by wind, rain, insects, birds, and on pruning implements to other trees.

Cankers can grow all year, but the greatest growth occurs in early spring before tree activity resumes.  Trees that are vigorous can form callus tissue around the canker, creating a barrier that slows growth of the fungus.

On stone fruit trees, copious yellow or amber gum on the bark indicates the presence of Leucostoma, while clear gum is not a disease, but rather injury (mechanical, low-temperature, or other) or borer activity.

Underneath the gumming, the tissue between the wood and bark interface is dead, and will be light to dark brown in color.  Progression of the infection often occurs in spurts which are evident in alternating bands of darker and lighter colored tissue.  Pimples appear beneath the bark as the spore-producing fruiting bodies (pycnidia) develop.  The  spores are released during and following extended wet periods.

As the canker progresses around the circumference of the branch or tree trunk, it girdles the structure and cuts off nutrient and water flow, resulting in dieback.  This can occur very rapidly when hot, dry weather increase the tree's demand for water.

Symptoms in apples are similar but without the amber gumming.  Infections result in a reddened color to the bark surface with reddish-brown discoloration of the tissue beneath.  As in stone fruits, branch dieback occurs more quickly during the heat of the summer.

On stone fruit trees, examine trunk and branches for dark, oozing gum in the spring.  On apple trees, look for bark with an unusual reddish tint.  On all trees, blackish pimples (pycnidia) on the affected bark confirms evidence of cytospora canker.

There currently are no effective chemical control options available for cytospora canker.