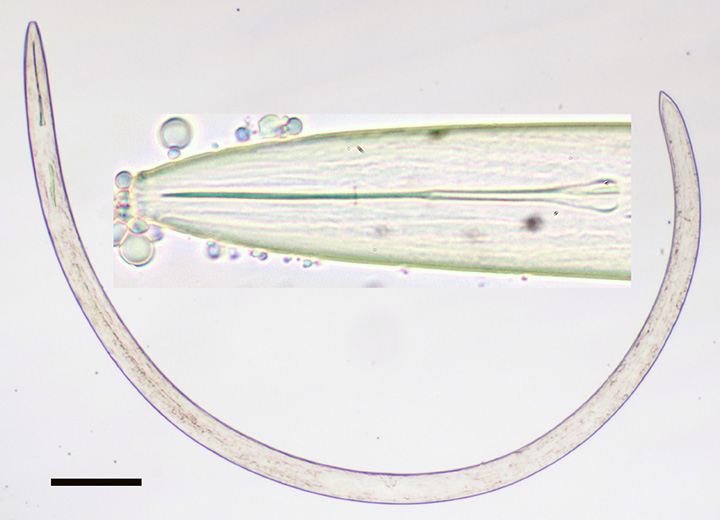 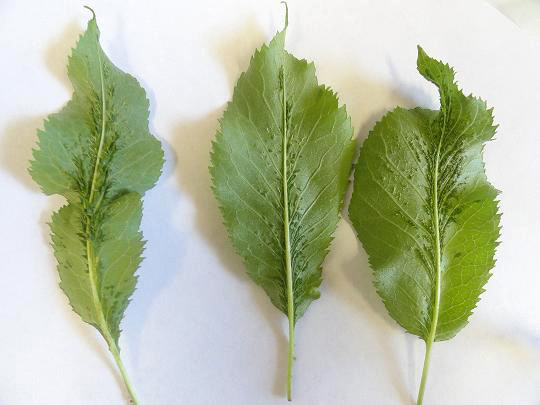 Nematodes are worm-shaped, nearly microscopic organisms.  There are many species of beneficial nematodes that help to improve nutrient cycling and feed on other soil microbes including plant pathogens and insects.  There are a few plant parasitic nematodes (PPN) that affect fruit trees.  They feed on plant cells using a spear-like structure called stylet to withdraw plant juices.

They cause small brown lesions on the white lateral roots and kill fine feeder roots.  The entire root system appears discolored when these lesions merge.  Severely affected trees may lose all feeder roots.  Ultimately, young replant trees will be stunted and chlorotic, and may die.  The most common root-lesion nematode in fruits that causes damage in apple, peach, cherry, grapes and so many other crops is P. vulnus.

This is the largest of the plant parasitic nematodes found in our orchard soils.  Up to 2-3 mm in length, it has a characteristic flanged bulb at the base of its stylet.  This nematode is observed in all most all fruit orchards in Colorado irrespective of crop, location, soil type, etc.

Females lay eggs singly in the soil near plants. They may take 6-12 months to complete their life cycle from egg to adult.  Dagger nematodes do not burrow into roots, but instead insert their long stylet deep into root tips where they feed on root tip cells.  This feeding causes some necrosis and stunting and swelling of root tips.

Symptoms caused by most of the plant parasitic nematodes are difficult to distinguish from those caused by other soil related problems.  Thus, identification based on symptoms is not easy.  They include:  non-uniform plant growth, mostly in patches and with poor plant establishment, giving an unhealthy appearance; chlorosis and stunting (resembling symptoms of some virus infections); stubby roots, bifurcated roots, root lesions, root galls (knots); excessive root branching and proliferation (“hairy root” symptoms); and poor root health,  growth, and establishment.

Nematode populations and species within soils of production blocks are monitored by collecting soil samples in a representative pattern (usually as a transect or a zig-zag pattern) across the production block.  Approximately 1 cup (~250 ml) of soil is collected from the top foot of soil for each sample and placed into a plastic bag for transport to the extraction location.  A 100 ml subsample is taken from each sample and the nematodes contained are extracted by density centrifugation, elutriation, or wet sieving for enumeration and identification.   Once identified and counted, the results are compared to the economic damage threshold for that species, crop, and soil type.

Organic amendments will increase the beneficial nematodes which will help to reduce the PPNs.  Marigold, sudan grass and Brassica spp. can be used as green manure crops to control PPNs and boost free living nematode populations in the soil.  Glucosinilate or isocthiocyanate content in many brassicas is known to control many PPNs.

Soil solarization is very effective for control of many nematodes and other soilborne pathogens.  For soil solarization: plow field to ensure looseness, ensure adequate moisture, cover with plastic, seal the plastic to make it air tight and maintain the seal for at least 45 days in June and July.  Soil solarization combined with green manure crops should be more effective.