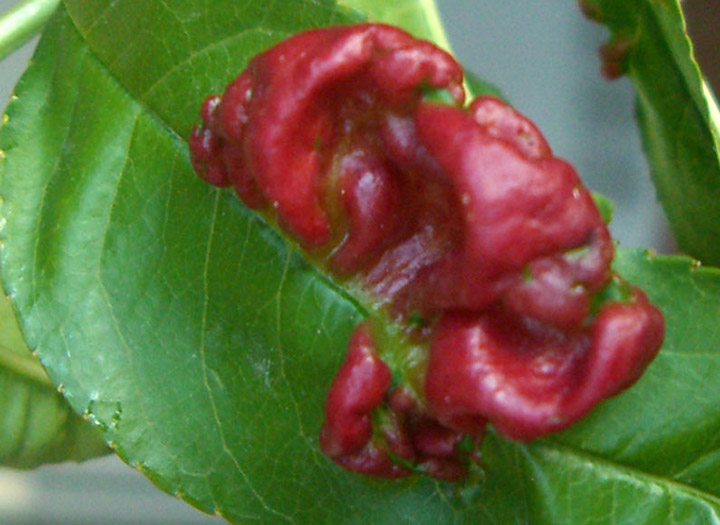 The fungus (Taphrina deformans) overwinters as resting spores on bud and bark surfaces.  During cool weather in spring, splashing water from irrigation or rain moves spores onto newly emerging leaves.  About 12.5 hours of moisture is needed for infection to occur at temperatures below 61°F.  The greatest amount of infection occurs when rains last 2 or more days.

If spring temperatures increase and remain above 70°F, symptoms may not appear from earlier infections.  Once leaves have fully expanded and the weather becomes hot  and dry, the fungus goes into dormancy.

Leaf symptoms first show up about 3 to 4 weeks after leaves start emerging.  The affected areas are red, thickened, and puckered, causing the leaf to curl.  The thickened areas then turn an olive yellow and velvety spores are produced on the surface by the leaf curl fungus.

Monitoring is not an effective IPM tool because once symptoms are visible, it is too late to take action that season.

Peach leaf curl is easily controlled by applying a fungicide (copper, chlorothalonil, or others) at leaf fall and/or during the dormant season in spring.  Fungicides should not be applied after symptoms are seen because by that time, new infections have ceased.