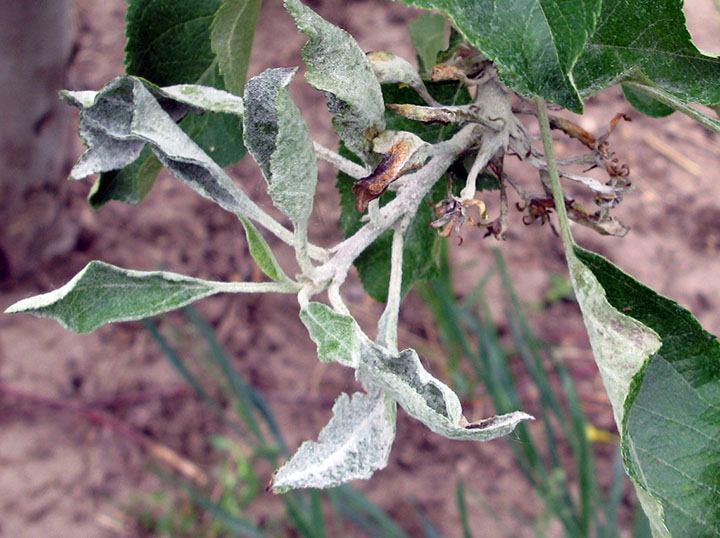 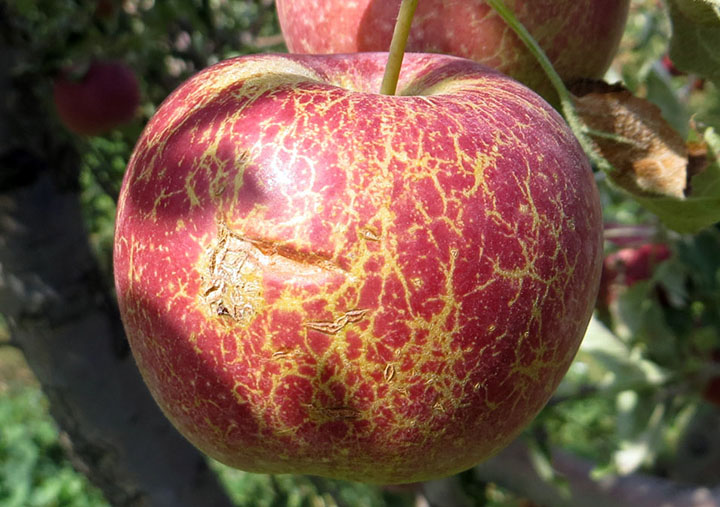 The apple mildew fungus overwinters as mycelium (thread-like, multicellular structures) on twigs and fruit buds.  As the buds open in the spring, the mycelium grows out into the developing leaf tissues, causing early spring infections.  Spores (conidia) are then released from these infected tissues to other leaves and fruit throughout the spring and summer.  Cloudy, overcast conditions with 70 - 90°F temperatures favor disease development until shoot growth stops and temperatures increase.

Cherry powdery mildew overwinters as cleistothecia (resting spore structures) on orchard floor detritus and in bark cracks and crevices.  In mid to late spring, after irrigation starts washing spores into the air, infections become visible on foliage closest to the ground or the trunk.  Secondary infections eventually spread throughout the tree to leaves and fruit.  Cooler temperatures and leaf senescence in the fall prompts the formation of cleistothecia on the undersides of leaves for overwintering.

Peach mildew overwinters as mycelium inside dormant rose buds and on inner bud scales of peach in milder climates.  Primary infections on emerging shoots (mostly rose shoots) produce conidia (spores) that are carried by wind to newly emerging leaves and produce secondary infections on rose and peach.  Early in the season, peach fruit is much more susceptible to infection than foliage.  Foliar infections are more obvious in late summer.

"Rusty spot" of peach fruit is caused by the apple mildew fungus.  Fruit is susceptible between shuck split and pit hardening.

Infected leaves and shoots of apple and cherry are covered by a light grey or white powdery coating of spores and mycelium.  They become curled, crinkled, and stunted.  Leaves may bronze or drop prematurely.

Infections on the surface of apple and peach fruit damages the fruit skin cells (the fruit epidermis) and results in scarring of the fruit surface, known as russet.

Tart cherry fruit with infected stems tend to be more difficult to harvest by shaking because the fruit doesn’t release as readily as non-infected fruit.

On apples, watch for shoot terminals with a whitish mycelial coating and terminal buds that are not tightly closed.  These shoots should be removed during dormant pruning.  As buds emerge in spring, look for dwarfed shoot growth or powdery infections on new foliage.

On cherries, examine leaves on suckers and spurs in the lowest portion of the crown for roundish mildew spots beginning in early bloom. Black Tartarian, Bing, Ranier, and Lapins sweet cherry and Montmorency tart cherry are highly susceptible to mildew.

Powdery mildew impacts can be minimized through cultural management and chemical control options.  These will differ with the crop type and mildew type involved.

Spring and summer sprays of sulfur (when temperatures are below 80°F), certain DMI fungicides, and the combination of a strobilurin and carboximide fungicide can provide effective control of apple, cherry, and peach mildew.  Avoid developing resistance to effective control chemistries by rotating modes of action for sprays applied throughout the season.

Available modes of action groups are as follows: