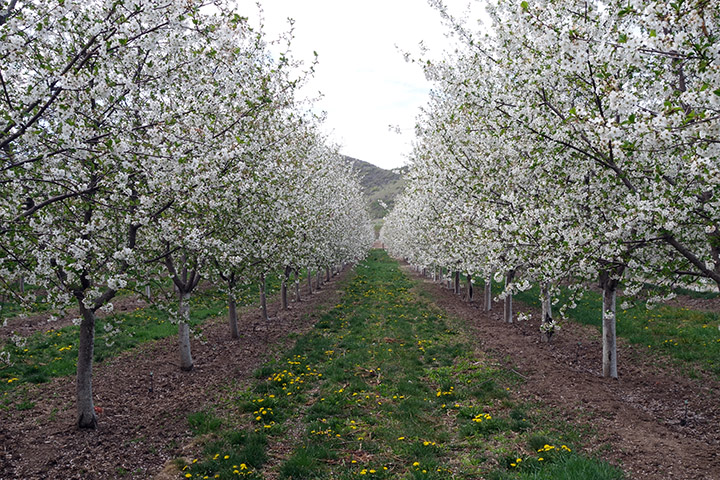 Cover crops can be one component of orchard floor management, but are not a “system” alone. Cover crops are important in maintaining soil structure, encouraging water infiltration, reducing erosion, reducing mud and dust, and maintaining an acceptable driving surface for equipment. A good cover crop can be established with grasses, broadleaf plants such as legumes, or both, although a uniform plant stand is often easier to manage than one made up of multiple crop species. A cover crop should establish itself quickly and thereafter should not require much maintenance. It should be chosen and managed so that competition with trees is minimal.

Grasses are the most common cover crops in orchards. Many different grasses and grass mixtures are available, so orchardists can choose what is best suited to each particular situation. Several low growing perennial rye grasses are available and allow easy orchard access even when headed out.

Legumes can be used as alleyway cover crops to grow additional nitrogen in the orchard. Mowing and discharging the nitrogen-rich plant material in the tree row effectively bands the nitrogen next to the tree roots. Plant adaptability to the Intermountain West climate greatly influences the legumes that can be considered. Alleyway-grown alfalfa has been shown to produce 50 pounds of nitrogen per acre in an orchard system. A drawback to this type of system is the lack of control over the timing of nitrogen availability. If the nitrogen becomes available late in the season, then this could create a flush of shoot growth that would delay hardening off of the orchard tree and increase susceptibility to early winter injury. Considerations on the time of mowing could appropriately add the nitrogen according to tree needs, and limit potential negative effects. Alfalfa does not hold up well to wheel traffic, and is not shade tolerant enough to persist in older orchards.

Use of legume covers does come with a few disadvantages.  Stink bugs and lygus can feed on the legumes, and after mowing, could move to the trees and feed on fruits, causing cat-facing injury. Legumes also require more irrigation than some other cover crops. In an established orchard environment, alfalfa and alfalfa-clover mixes were shown to transpire more than twice as much water as a conventional grass alleyway. Although legumes add nitrogen to the orchard soil, the fertility benefits may not outweigh the cost of managing increased pest populations or maintaining proper soil moisture where irrigation water is limiting.

Grasses can be planted in either the spring or late summer (August 15 to September 15).  Late summer establishment is preferred because warmer soils result in rapid germination, and because annual weeds that germinate at the same time should be killed by fall frosts before they flower and produce seed.  Establish sod over the entire orchard in the fall before tree planting.  Once the sod is growing well, mark out the orchard rows and kill the grass in the planting row using glyphosate or paraquat.  The dead sod will help prevent erosion during the winter and spring.  With sod already in place, planting will be easier and less muddy.

Legumes are best planted in the spring after the soil has warmed and can be worked.  Usually a grass/legume mixture is planted to obtain the benefits of both types of plants.

Once a cover crop is established, required maintenance should be minimal. Maintenance operations include fertilizing, mowing, irrigating, and controlling weeds.  No nitrogen fertilizer beyond that provided for the trees should be required, especially if a grass/legume mixture is used because legumes can capture atmospheric nitrogen and make it available to grasses (or other non-legume vegetation).

Grass covers will require mowing several times each year.  A mowing height of 3-4 inches is best.  If dandelions or other weeds are flowering concurrently with tree fruits, the dandelions should be mowed to remove the flowers.  Weed flowers compete with fruit tree blossoms for bee visits and poor pollination may result.  The flowering period of spring is also the critical time for frost protection.  A closely mowed orchard floor can radiate more energy back into the orchard than one with tall vegetation.  Mow again when seed heads have formed on grasses but before the seed has matured.  Once grasses have set seed, less growth will occur after mowing.  Mowing just before harvest will facilitate moving shakers, bins, ladders, and boxes through the orchard.  If much regrowth occurs after harvest, the orchard should be mowed again in the late fall to remove habitat favorable for rodents.

Drought tolerance is another good measure of a cover crop.  Irrigation required for cover crops should be low.  Perennial grasses can go dormant in the summer when irrigation is sporadic, but will regrow in the fall with cooler and wet weather.  However, in arid areas like the Intermountain West, periodic irrigation is still required.