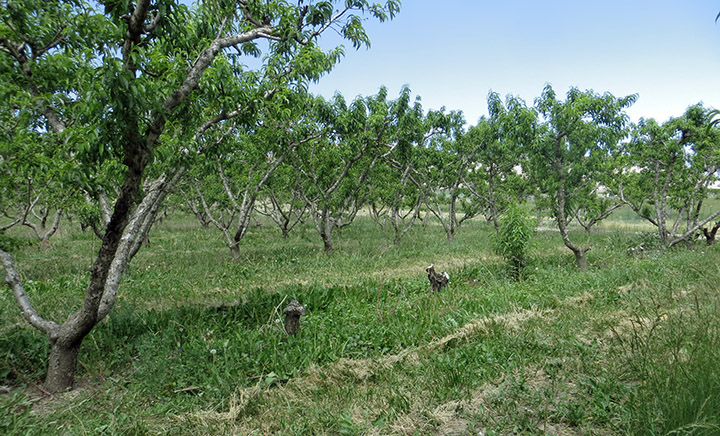 Orchard trees replanted into soil previously cropped to the same tree type (apple after apple, peach after peach, etc.) often grow slower and more poorly than the same trees planted into virgin soils or soils previously planted to a different type of crop.

As a result, the onset and rate of fruit production is slowed for those trees. In addition, total fruit production and crop returns over the life of the orchard planting are reduced. There are several proposed reasons for this:

The third explanation seems to be the most likely because treatment of these soils with soil pesticides (nematicides, fungicides, broad-spectrum soil fumigants) has enhanced growth of new trees in old orchard soil. Narrow-spectrum treatments (nematicides, fungicides) often provide less enhancement of new growth than treatment with broad-spectrum soil fumigants (e.g., methyl bromide, chloropicrin). In addition, growth rates of the new trees in soils treated with soil fumigants typically diminish over the initial 3 years after planting to become equivalent to those of trees in non-treated soils. Thus, it is likely that the cause of the replant problem is a complex interaction of the soil nematodes, fungi, bacteria, and microfauna that slow root growth and function.

Replant problems take about 3 years to be re-established in soils treated with broad spectrum fumigants or in virgin soils used to replace old orchard soils within an orchard block being replanted. Rotation to another type of crop (e.g., alfalfa) requires about 8-10 years to return the soil to a state comparable to virgin soil for the initial crop.

Several approaches have been used to address orchard replant problems. First is crop rotation: This usually requires a rotation of 8-10 years to a crop different than the original crop (e.g., peach to apple, peach to alfalfa, etc.).

Another is to replace old orchard soil with virgin soil or soil from a different crop. Dig a 3 ft x 3 ft x 3 ft deep hole and replace the soil in the hole with fresh soil. This labor intensive option is best for a single tree or a few trees within an existing old orchard block.

A third option is soil solarization: Homogenize the soil to very small, uniform soil units, provide sufficient soil moisture to encourage seed germination, and cover the prepared ground with one or two layers of transparent plastic mulch. Seal the edges of the mulch by burying them with soil. The sunlight will heat the soil beneath the clear plastic over time to temperatures as high as 140°F. The temperature threshold for control of soilborne pathogens is 99°F, and control is increased the longer temperatures remain above this point. The longer the plastic remains on the soil plots in the summer months, the deeper the heat will penetrate (it needs to treat as far down as 3 ft.). Once solarization is completed, the plastic mulch can be removed and trees planted into the treated soil, taking care not to pull untreated soil into the planting hole.

A fourth option is soil pasteurization through use of low pressure steam to raise soil temperature to 160°F for 3-4 hrs. However, field-friendly low-pressure steam generation is rarely available to growers. The process does allow replanting within a day or two after treatment (when soil temperatures return to 70°F or below).

The last option is soil fumigation. This typically involves use of restricted use pesticides such as Telone II (a nematicide), Telone C-17 (combination nematicide + broad-spectrum fumigant, chloropicrin), chloropicrin (broad-spectrum soil fumigant), methyl bromide or methyl iodide (broad-spectrum soil fumigants). Application of soil fumigants is becoming increasingly regulated because of the risk to the applicator, passers-by, and the environment. They need to be injected into the soil at 18 inches depth and the soil left undisturbed for at least a week. They also have minimum soil temperature thresholds for application (often 50°F or above).